The ” “Phase-in Overtime for Agricultural Workers Act for 2016” was stuck in the Assembly Appropriations Committee’s ‘Suspense file’ for 2 months, but passed out of that committee 14-6 on May 27. So onto the Assembly where it was amended twice and read three times before the vote that sent it down to defeat. 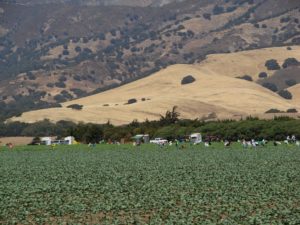 Originally AB 2757, if passed, would have phased in a change to the overtime law for ag workers beginning in 2017 through 2020. The proposal would have moved the threshold for time and half overtime pay from 10 to 8 hours a day and double time starting at over 12 hours in one day. But as the the bill was read, it was apparent that it wasn’t going to pass, so the bill’s authors scrambled to amend the bill and push back the starting date to January 1, 2019. So after two amendments and three readings, the bill went down to defeat 38-35.

Supporters were quick to take to social media and pledge support for farm workers in their effort to improve wages. Sarah Cain ‏@phillytomato posted, “Heartbreaking. 38-35 final vote. #RespectThePeopleWhoGrowYourFood. @LorenaAD80 TY so much for #AB2757, Solidarity.”

But opposers would win in the end. The Agriculture entities lined up against the proposal saying that with the just passed minimum wage hike signed by Governor Brown and to add this overtime measure would actually harm workers with growers reducing their hours.

The UFW had backed this proposal and we’ll have to wait and see if a new measure will surface on behalf of overtime hours for ag workers.

It seems that a measure of this nature was too soon after the minimum wage hike in California.

Updated 4.25.16 – Assembly Bill 2757, dubbed the “Phase-in Overtime for Agricultural Workers Act for 2016” has been sent to the ‘Suspense File’ in the Assembly. This is standard operating procedure for any bill in the Assembly that has a fiscal impact over $150,000. 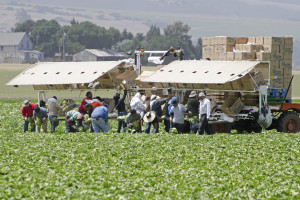 The fiscal impact of this proposal according to the Committee on Appropriations is stated in the Bill’s analysis, “Administrative costs in the range of $326,000 to $586,000 (Labor Enforcement and Compliance Fund), assuming a 10-20% increase in wage claims annually during the four year implementation phase. These cost estimates reflect resources for additional staffing and outreach to employers and employees. The bill proposes a dramatic shift in the industry and since the hours and rates of pay change annually during the implementation phase, DIR notes that employees may not know their rights and employers may not know which timeframe applies for any given year. Once the bill is fully implemented, costs are likely to range between $20,000 to $30,000 annually.”

So this essentially means that AB 2757 will be in ‘suspense’ until the next state budget is hammered out. The Governor’s May revise of the budget is coming up, and a new budget is due to begin on July 1. So barring any unforeseen budget crisis that delays a signed 2016/17 budget by Governor Brown, the Assembly members on the Appropriations Committee will have a better idea what monies they’ll have to work with after July 1.

We don’t expect to hear any new information from the Appropriations Committee until after July 1 on AB 2757.

As far as support and opposition goes, the United Farm Workers Union supports AB 2757, but the Agricultural Council of California opposes this bill. They say, “farmers, their employees and their operations are critically affected by the uncontrollable whims of nature and the seasonality of agricultural production. Agriculture needs greater flexibility in scheduling work than do other industries and that state and federal laws currently recognize this reality. They state that California regulations are one of the most generous in the country with regard to overtime pay for agricultural workers.”

Opposers also say that the cost of farming in California has risen by 36% over the past few years. With that being the case they say that farmers are likely to avoid the additional costs imposed by this bill by limiting worker hours and hiring more workers to make up the difference.

Datatech will continue to watch this story as it unfolds in the State Assembly.

Updated 4.18.16 – We should know more on April 20 as to where AB 2757 stands with lawmakers in Sacramento. The Assembly Appropriations committee is slated to consider the proposal that would gradually decrease the hourly ceiling for overtime pay from 10 hours in a day to 8 hours in a day by 2020. Assembly Member Lorena Gonzalez of San Diego is the bill’s author and has been quoted as saying that it’s time for farm workers to be treated fairly and as other workers in the state.

Gonzalez says, ““In 1976, California became a national leader on workers’ rights when it enacted overtime protections for farmworkers. Once again, California is poised to lead our nation on this matter of equity and justice.”

The “Phase-in Overtime for Agricultural Workers Act of 2016” has already passed the Assembly Labor and Employment Committee on April 7. Interestingly, who sits as the Chair of the Appropriations Committee but Gonzalez, herself. Assembly Member Frank Bigelow is the Vice Chair. The consideration of AB 2757 is slated for late in the committee session, so it may be tabled for a later consideration. We’ll have to wait and see.

In the meantime, AB 2757 has become another polarizing wage issue and is sure to bring its fair share of criticism. Stay Tuned.

In the wake of California Governor Jerry Brown signing the new minimum wage legislation into law, comes a proposal that will boost overtime hours of Ag workers beginning July 1, 2017. If signed into law as is, the proposal would provide for up to double-time pay for Ag workers who work over 12 hours in one day by 2020. The current daily limit for overtime pay is 10 hours, this proposal would repeal that requirement and eventually reduce the overtime threshold to 8 hours in one day.

The business community is already up in arms about the new minimum wage law, making California the country’s leader in the minimum wage arena. Many Chambers of Commerce have openly opposed this to their members. Now comes Assembly Bill 2757 that would incrementally increase overtime pay starting in 2017 to time and half for working over 9.5 hours in a day or in excess of 55 hours in one work week. The scale would decrease from their each year to time and half for over 8 hours in one day to double-time pay for over 12 hours in one day by January of 2020.

There’s no doubt the labor costs will increase with raising the minimum wage in California. What could the proposed AB 2757 do to farm labor costs? Time will tell.

Organizations such as the Western Growers Association have line up against these moves by Sacramento legislative leaders.

Datatech will continue to follow this legislation and report on it here.

Datatech is a leader in easy to use Ag accounting, payroll, human resources, inventory and sales software. You’ll find us in over 21 states and we’re grounded in the agricultural heart of the Central Valley of California.